I can’t resist the urge to quote a sentence from Friedrich Nietzsche:

“What does your conscience tell you?” – You have to become who you are. This is the hardest part of your life “

It wasn’t hard for me at all. Quite the contrary. Admittedly, I found it difficult to leave the Ministry of Posts and Telecommunications but when my husband was transferred as Wali (Governor) to Sidi Bel Abbes in the west of Algeria, oh! How happy I was to meet my students who came to me in their youth, and their mad desire to learn.

When I got lost in the desert, at the most terrible of my moments of fear and despair, I dozed off and when waking up, opening my eyes I saw coming to me the tanks of the Garamantes painted on the walls of the rock under which I had sheltered. Isn’t that what inspired me to write “Emeraude”?

So I was transferred to Djilali Liabes University in Sidi Bel Abbés as a simple assistant. The module I was in charge of was that of “Electrical and Electronic Measurements” for students in their third year of engineering at the Institute of Electronics. From the first day, I loved my students. I had established a family relationship with them by presenting myself as a mom and not as the teacher looking down on “students”. It was “Yemma” my mother who taught me this behaviour which became a second nature. She told me:

“When you talk to anyone, never look down on them. Do, a flexion of the knee my daughter and the eyes in the eyes gradually raises their look in harmony with yours to make them understand the thought that you want to communicate to them. ”

What I wanted to communicate to my students was this world of knowledge built upon my experience. First hand practical experience in tough surroundings had trained and disciplined my thinking with the problems that I had to solve after the relief of telecommunications disturbances. The notion of measure was thus instilled in me at a young age …

How not to give oneself totally to this teaching which is the foundation of knowledge.

My lessons always started with the epistemology of measurement: How did this idea come to man? What was the first measuring device?

But first of all, one of the transparencies that I projected on the overhead projector, was the notion of balance.

Because, the measuring devices registered in the program of the time, were designed with the measurement that comes from the balance above all. 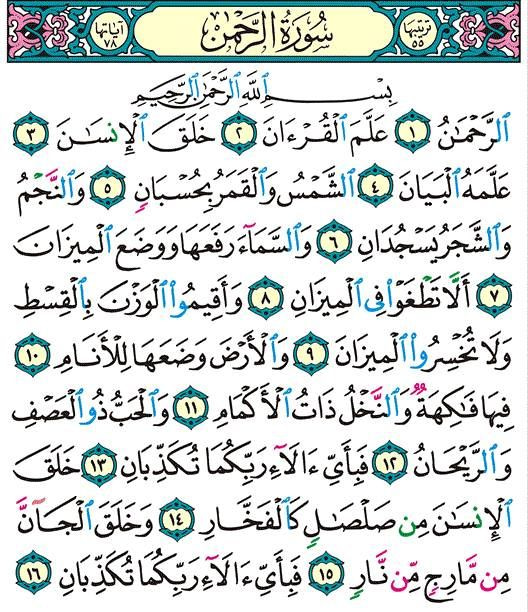 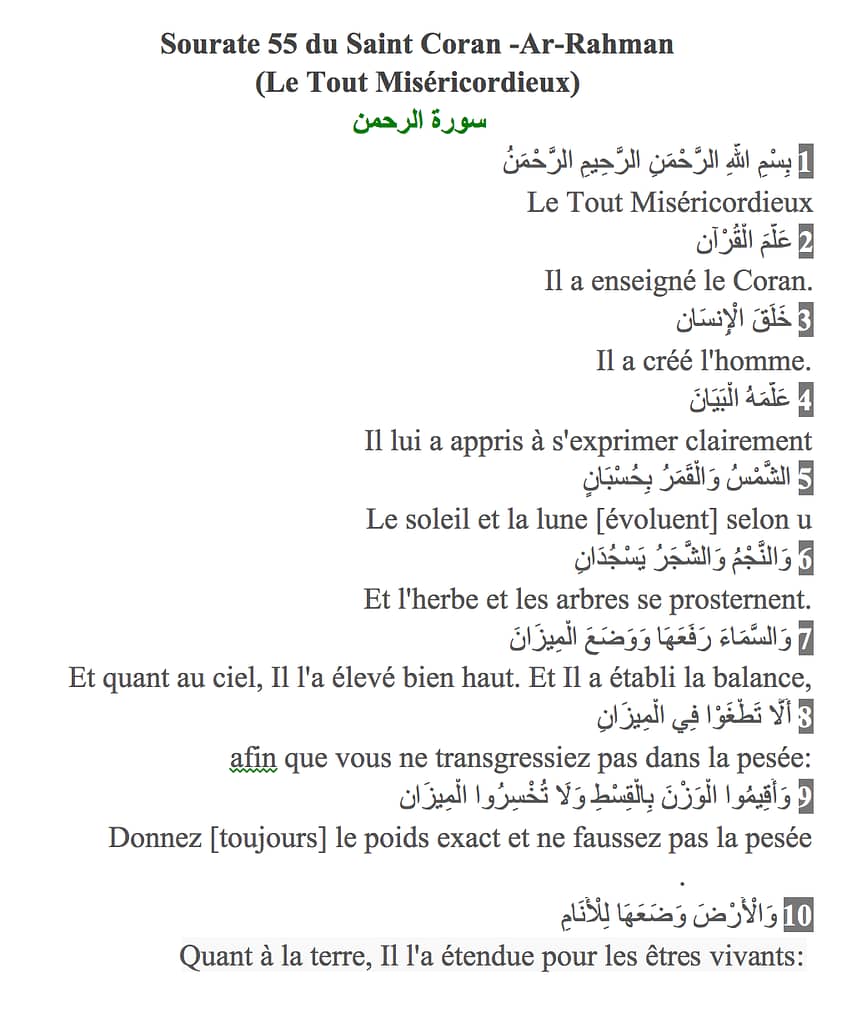 The more I deepened my research on the world of measurement that came to me, the more I felt an unqualified force that carried me towards my students eager for the knowledge that I transmitted to them.

“Man is the
measure of all things: of those who are, of the fact that they are; of those
who are not, because they are not” said Plato.

Capturing, studying a phenomenon and then evaluating it experimentally to give it physical grandeur is a long story that has marked all of human history.

From the theoretical courses, to the tutorials and to the practicals, the story that I told them governing a measuring device was there always omnipresent.

From the surveyor’s rope that the scribes used in the time of the pharaohs to measure the cultivated areas and record the harvest for tax, to the simple graduated rule with the most complex devices, the size assigned requires knowledge of physical laws , processing the influx from one or more sensors. How can I explain this to them in a simple and attractive way?

It is by approaching the system of measurement standards, that I approached the repository. Can we be what we are without a frame of reference? It was the same with the design of a measuring device.

From the measurement of length to that of weight, over time, the electrical intensity I defined the MKSA system (Meters, Kilogram, Second Amps) by telling my story from zero point in Algeria … that of my birth. The story of my childhood neighborhood: the Colonne Voirol.

It was an opportunity to invite my students to enter the world of knowledge practically by telling them the story of the neighborhood of my childhood which is the zero point of all distances in Algeria. Sidi Bel Abbes is 434.51 km from Colonne Voirol. They understood the frame of reference and from there I continued the history of measurement standards.

I’ve been teaching this module for years, and never have I had so much fun with my students at all the universities I’ve been through.

Later after my Masters degree defense, I taught modules like that of “Waves and vibrations”, yet another world that opened up to me that I enjoyed starting with a riddle in my first lesson. A riddle that Hubert Reeves had inspired me: “Behind everything that changes, there is only one thing that does not change” what is it?

I left them whole days to think, and they were always bursts of joy from Oran, Bab Ezzouar, Laghouat, Sidi Bel Abbés in all the universities in which I went, I adored my students who brought me an intense joy, that of being understood.

But this happiness was also fleeting, I had to leave this scientific world as well as my doctoral research. A few months before my thesis defense, I had to leave everything.

The status of woman, intellectual and wife of a senior official forced me to flee my country in the 90s. Faced with this mass violence carried by a ruthless fundamentalism, I left to Tunisia abandoning my family, with only my degrees and my daughter with me. 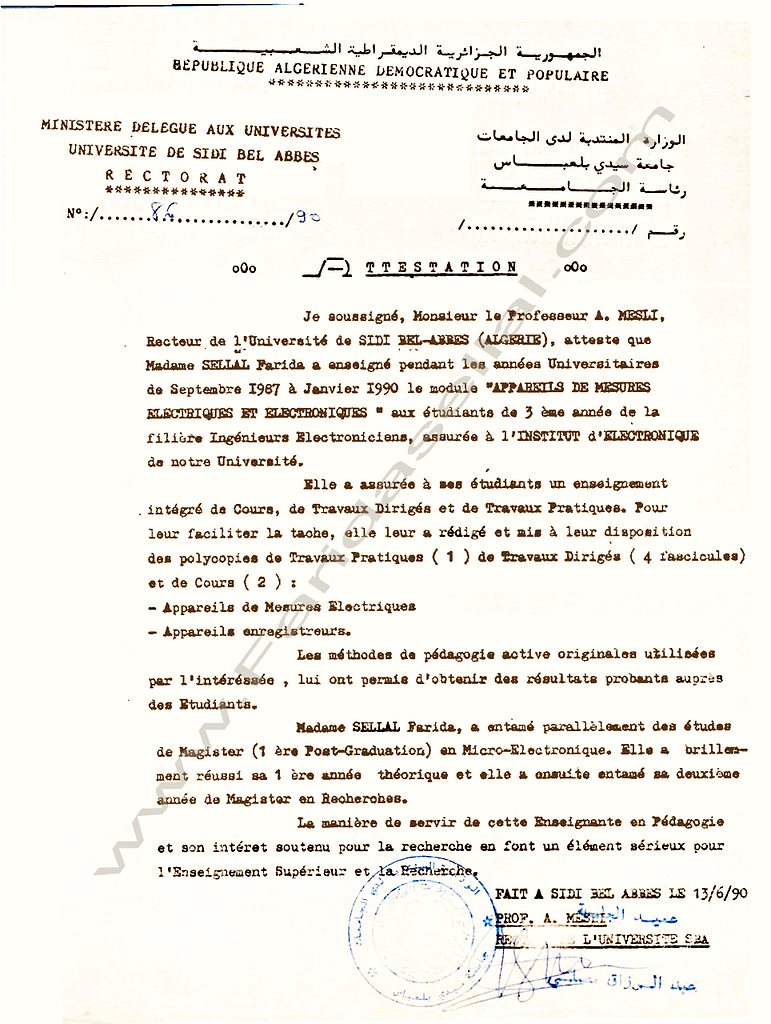 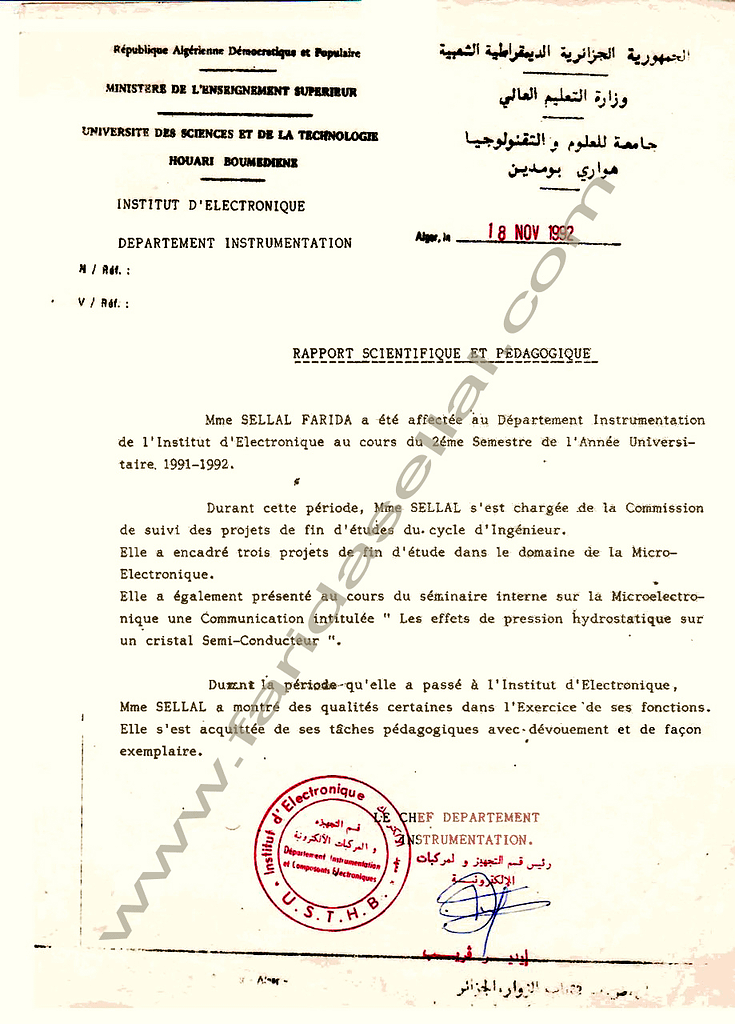 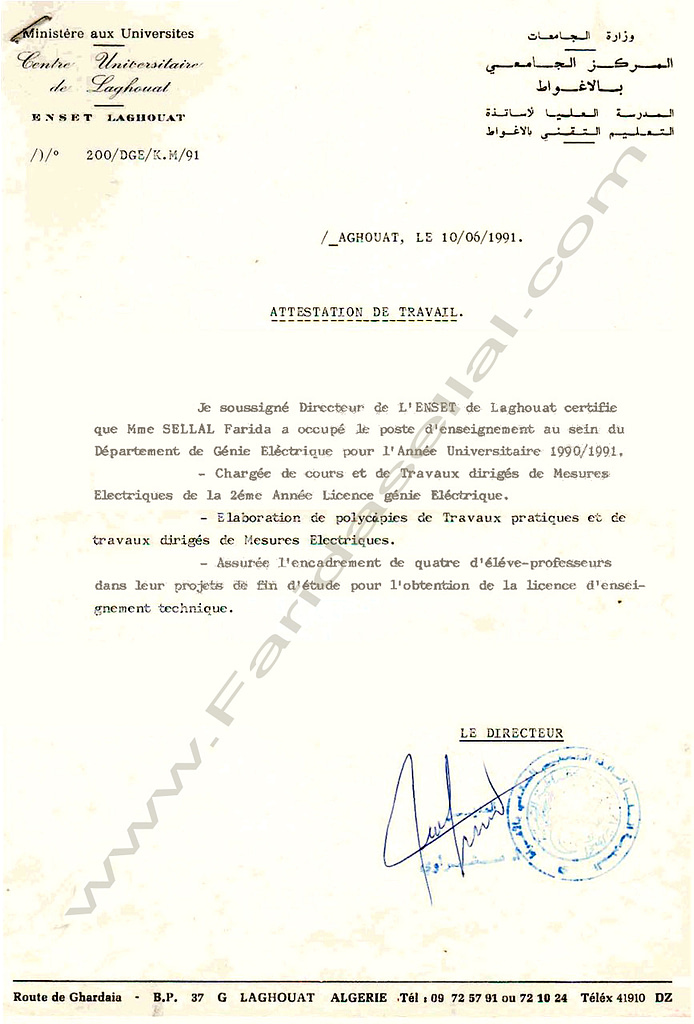 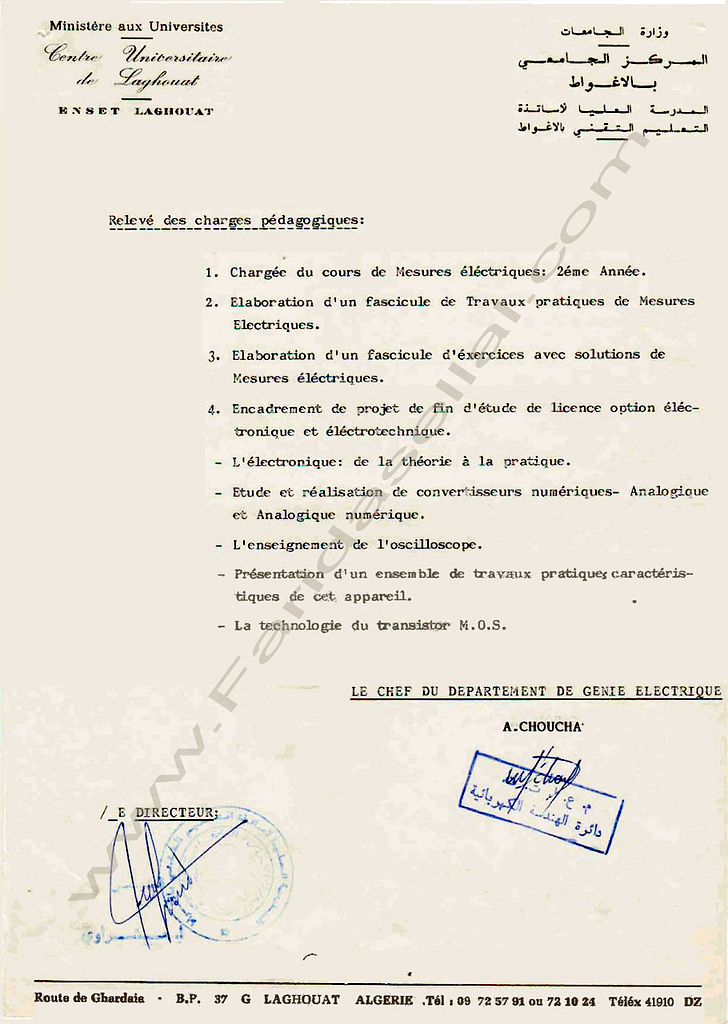 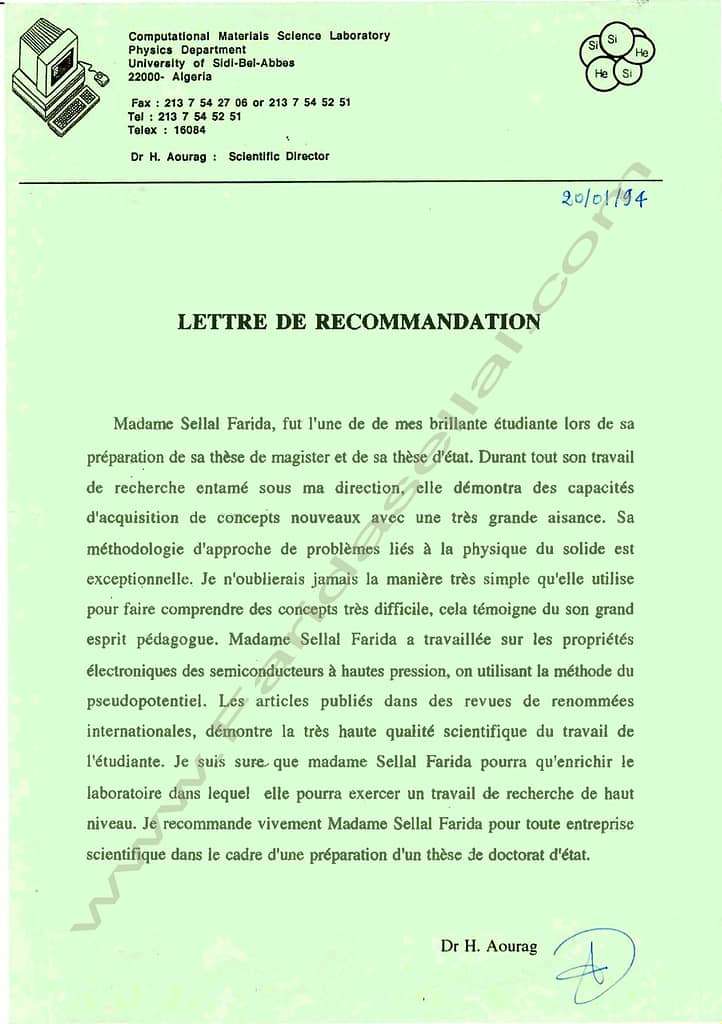 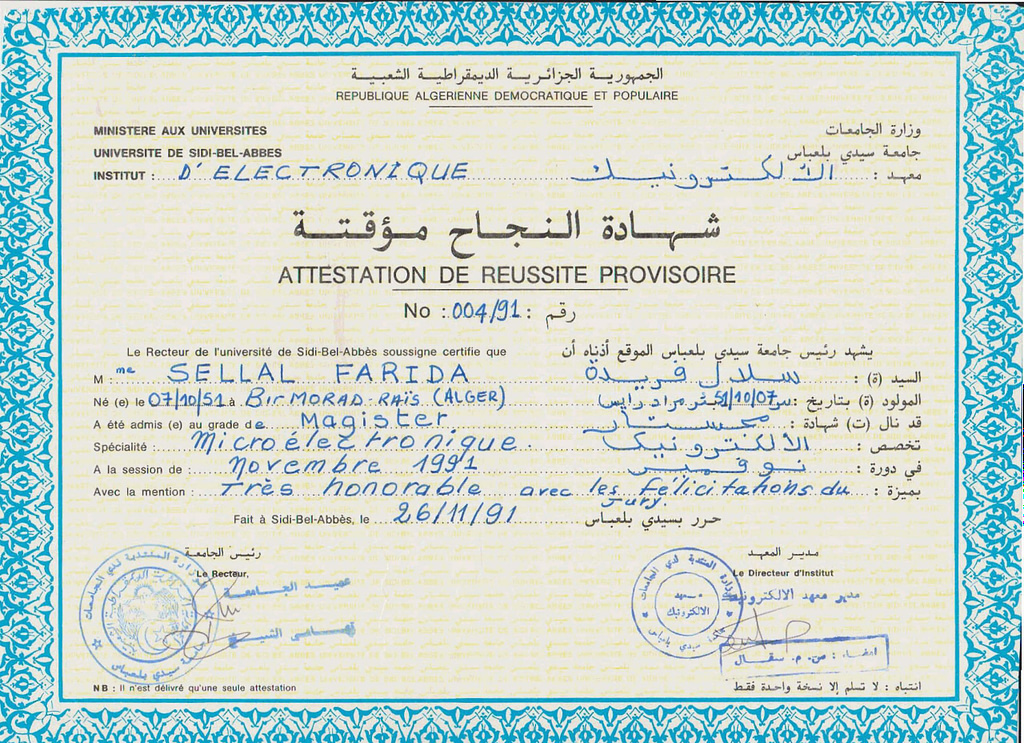 Design and production of handouts on the modules:

ORGANIZATION AND PARTICIPATION IN SEMINARS

Seminar on Science Didactics in June 1993 at the Djillali Liabès University in Sidi Bel Abbés.

International meeting on materials science in April 1993 in Tlemcen.

Seminar on microelectronics at the USTHB – (University – Algiers) in June 1992.

National seminar on Science Didactics at the University of Sidi-Bel Abbés in June 1992.

Seminar on material science at the University of Sidi Bel Abbés.

International meeting on electronic components and systems in November 1991 at Sidi Bel Abbés.